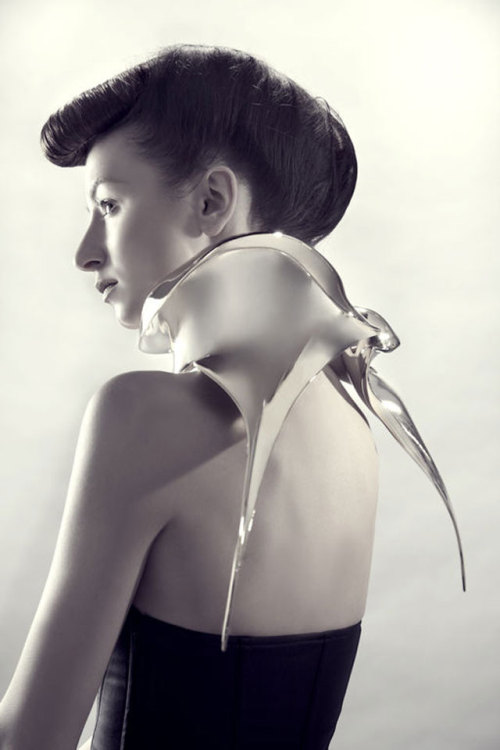 I so fell in love with Hanwen Chen’s amazing neckpieces in organic forms that contrast with the hardness of the metals gold, nickel and and copper. 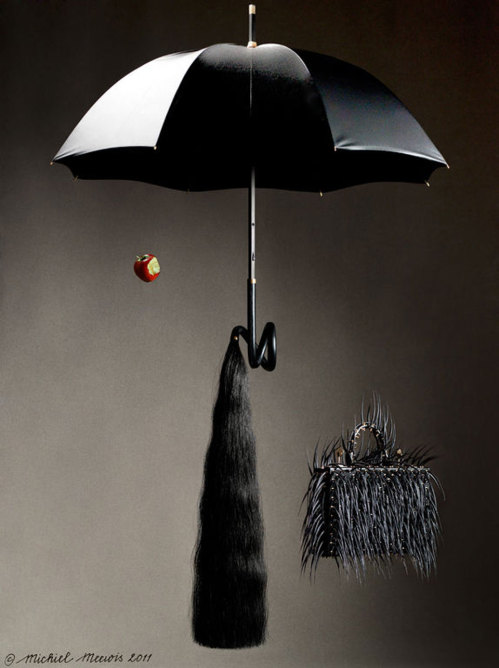 Cases, umbrellas, and bike seats outfitted with hair and spikes – an awkward sight of exploration by Oliver Ruuger that challenges and pushes our idea of boundaries in the area of fashion. 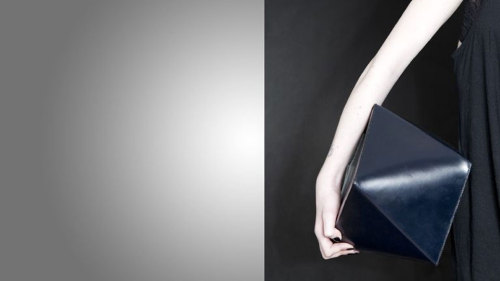 Chaos vs. Control. I loved Alexandra Gross‘s asymmetrical bags made out of black leather. They are animating to play around just like a Rubik’s Cube. 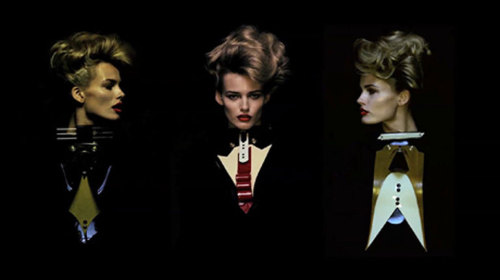 Great movie done by Nick Knight from SHOWstudio featuring Edita At Viva with the neckpieces by Kat Marks out of plastic, leather, chains and foxtails coming in the beautiful combination of colours such as bordeaux, black, mustard, gold and off-white. 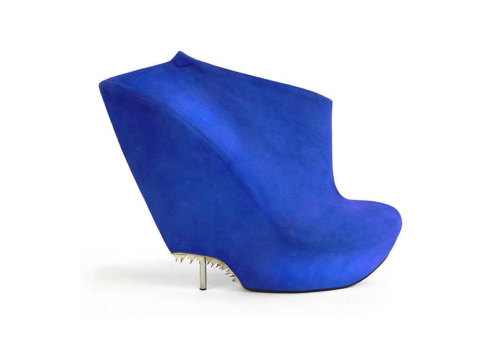 Pushy and eccentric but wearable shoes in a striking contrast of black and Yves Klein blue by Netta Makkonen. 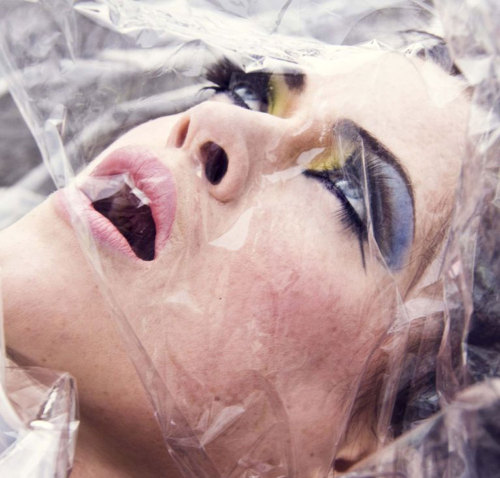 The project A Drop of Water, a Fight for Life by Laura Cusi Grande started with the idea of merging fashion photography and social issues in a more commercial way, to be able to reach a wider audience. It is targeted to teenage girls, trying to make them aware of water problems such as the overuse of plastic bottles, oil spills, water pollution etc. 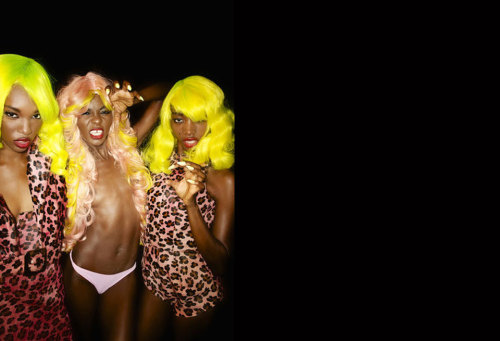 Giovanni Martins showed the movie Manifesto (5.55) inspired by Andre Bretons Le Manifeste du surrealism from 1924 and the techniques used in other classic surrealist films such as Cocteau’s Blood of a poet and Luis Bunuel’s Un chien de Andalou. It was done using bullet time animation techniques (think The Matrix) where every moment is captured by fifty cameras simultaneously, resulting in a 360 degree effect. But to me it stayed a bit too much on an experimental level, I much more like the non-animated works of the Dutch photographer. 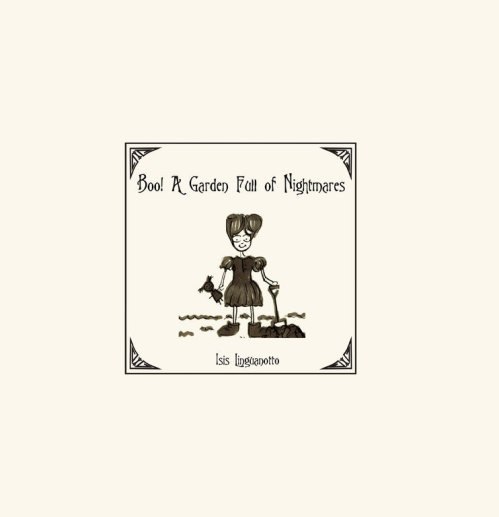 Boo! A Garden Full of Nightmares is the graduation project by Isis Linguanotto. She is dedicated to explore the child photographic image in a fashion context. I like her approach to put fashion into a kid’s story in a wonderfully crafted book that features a poem by Suket Rari Har. 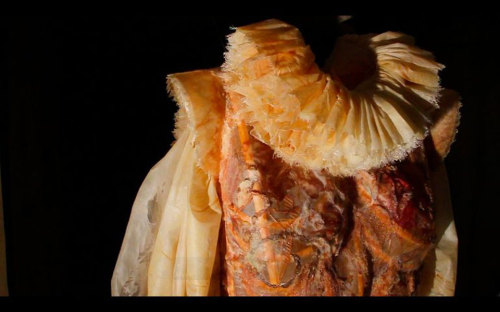 Textile and material explorations, research, making and drawing are at the base of Berthe Fortin’s design developments for performance. In her movie The Descent of Orpheus-Eurydice (6.30), inspired by Monteverdi’s opera L’Orfeo, she shows a fleshy interpretation of the Greek myth of Orpheus. L’Orfeo was the first opera in which both male and female roles were performed by men, providing a rich historical context to explore notions of gender and cross dressing. 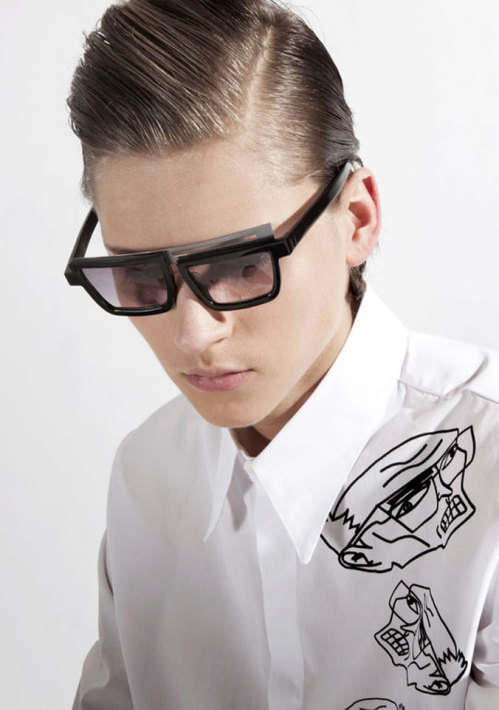 South Korean Mio Jin was awarded the Harold Tillman scholarship thanks to her lovely collection featuring woodplates on a jacket that make it look like an urban armature, fold down collar shirts that show silk printed illustrations and bells as applications and a red bolero with a cushion-like extension at the back. I like. 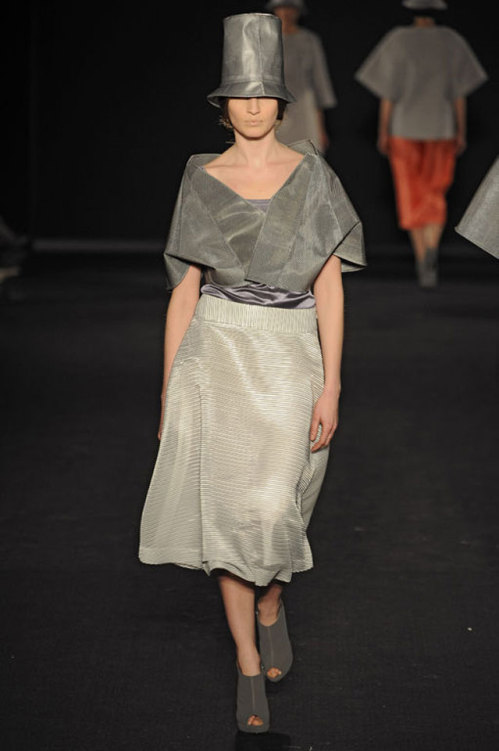 Nam Young Kim uses interesting materials and details such as a zipper that goes all the way from the front to the back on experimental geometrical garments. 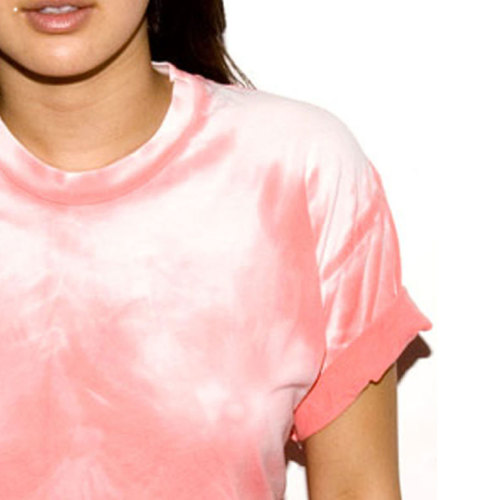 Marie-Anna Lynch’s collection was inspired by her personal illness, epilepsy. She was intrigued by the research into Hyper-Colour inks of the 1980s and studied viability of thermochromic and photochromic digitally printed surfaces as response to the body states of people sensitive to heat and light or with medical conditions such as epilepsy or lupus. Providing a hairdryer at the MA exhibition she left the visitor to heat the garment and see prints vanish in the interactive heating process – great!

MA Fashion and the Environment

The concept behind Yinyin Luh’s collection is inspired by a traditional Cantonese natural dying silk, produced through low impact processes. This natural body regulator known since the Ming Dynasty has been forgotten and left aside for contemporary materials. It promises a confident wearing experience and a sense of wellbeing.