Interiority As A Rainbow – Sometimes, Fashion Can Be Beautiful Even When It’s Sickening

Interiority is a tricky thing. We think ‚food‘ only from supermarket to mouth. Everything else fortunately doesn’t happen in the observable realm. 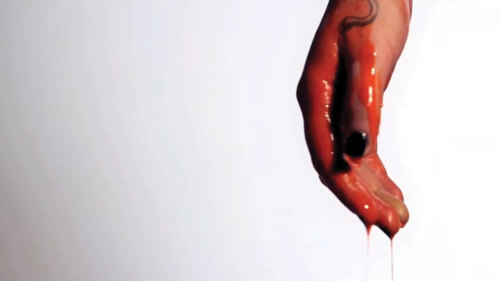 'I believe any work I'm doing is a coincidence.' - Piotr Onak

And if the inner should happen to turn outside it is a natural process though one that can turn our stomach. We don’t want to mention it, think or even see it. But nowadays we are more likely to get the message visually than verbally. In September 2010, Designer Martina Spetlova, performance artist Millie Brown and filmmaker Piotr Onak created one of the most memorable examples of of serendipity at work. At Pedigree, an off schedule event at London Fashion Week, they came up with a thought-provoking film that screamed displaced social responsibility and created an obnoxious tension. Breaking down the boundaries between fashion, performance and visual art, the outcome was unveiling things we tend rather to ignore. Projected onto a large screen a model wore a white dress and spewed bright fluid all over it creating the most fabulous pattern, transgress the boundaries between exterior and interior, subject and object, organic and not organic. It might not be everybody’s cup of tea and could provoke thoughts of anorexia rather than beauty in fashion. I met the contributors in Dalston, London, to talk about their collaboration across disciplines. 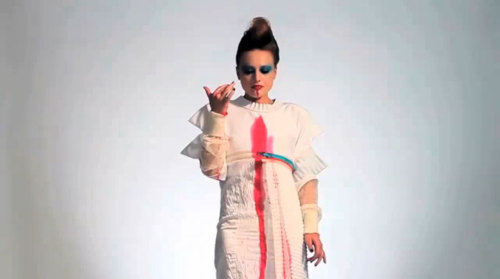 What is serendipity to you?

Piotr: Most of your life is about coincidence: Who you are going to meet, what you are going to learn, what kind of pictures will come to your mind. Everything is a collection of all these things. Some people talk about faith, some talk about coincidence or trust. I believe any work I’m doing is a coincidence. The idea itself is a big coincidence. You never know what is going to come your way and inspire you. It’s enhanced when doing backstage films because you don’t know how somebody is going to move. So you are trying to capture the movement of a model when she’s getting a coke.

Millie: When I am performing, especially when doing film, I’m very conscious about how it’s looking as opposed to how I’m feeling. You can’t always control your body, it might twitch or shake, it just reacts. Not to know what is going to happen can be quite scary as well.

Piotr: At some stage during the take you were crying, only a few tears, but you can see it. You were standing quite still trying to stop it, but it looks beautiful. You were fighting against your inner feelings and what was happening to you. I found this a very strong moment. 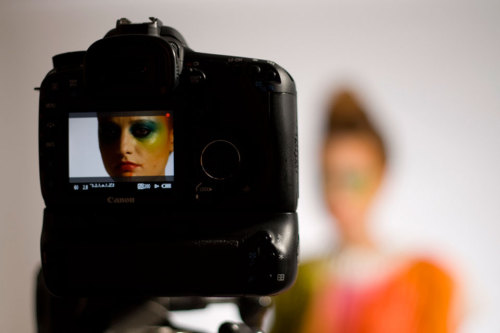 A thought-provoking film that screams displaced social responsibility and creates an obnoxious tension.

How did the idea of your interdisciplinary project arise?

Piotr: The idea of the film was initially absolutely different, it was going to involve a bike and something else. When I saw Martina’s MA collection which was about Lego and of which she said it could be destructed and built again, I thought that combining several elements of her collection in one piece would show something a bit stronger. I also thought it would be amazing if Millie would be part of it showing the creation of the dress.

Martina: I always wanted to work with Piotr. We met for coffee and he came up with this idea.  It was quite a nice way of showing my work but not my collection. I made this dress especially for the film using all sorts of textures so when the colour hit the garment obviously the various fabrics reacted in different ways.

Was the choice of the colours conceptual or intuitive?

Millie: I always mix and plan the colours ahead of performing. My first performance took place in Berlin. All I knew was that I wanted to do something bright and colourful and suddenly came up with the idea of spewing a rainbow. I learnt a lot by doing it, like how not to get the colours mixed up in my body. Because I am a vegan I use soy milk to mix the colours with and empty my stomach completely before doing the next one. 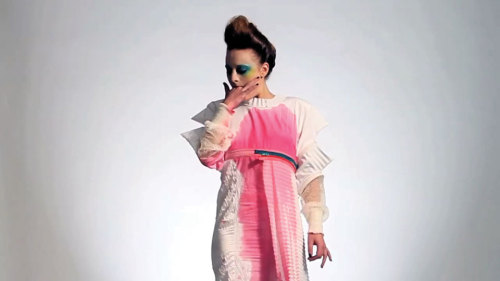 Transgressing the boundaries between exterior and interior, subject and object, organic and not organic.

Martina: Millie doesn’t eat up to three days before a performance, so there is no food involved. A lot of people find it disgusting, but all it is is colour. Because there is no food there is no smell and no particles, which aesthetically makes more sense. Projected it looked different from what it looked like on the screen: red rather than pink, like as if she was spewing blood. I didn’t mind at all. It was actually quite beautiful. Millie was going to spew the colours of the collection, that’s where it is strongly related to my work. But in terms of food colourings it is not easy to find specific colours, they only have very straightforward ones. During the take, however, I realized it doesn’t matter. Talking about serendipity and letting go during the design process, I enjoyed that. And it worked out very well. It was great because it wasn’t supposed to be beautiful but it was beautiful.

Martina: Provoking. I was quite interested in reactions since it was a harsh piece, even the music was quite uncomfortable. Some found it amazing, they were really taken by it, others obviously were disgusted. Some couldn’t believe it and thought it was staged.

What is beauty to you?

Martina: If I think of beauty in terms of design I think of beauty as gritty and harsh. In the film there was pink and orange on the dress which are bright, beautiful colours; and then we’ve done another which was amazing: it was a powder, not a liquid, and came as green. When it dried out on the fabric it was almost yellow and all these different kinds of quite harsh greens. You could see bits of the powder on the dress. It was beautiful – not in terms of a beautiful thing. That extra element to it made it more beautiful. 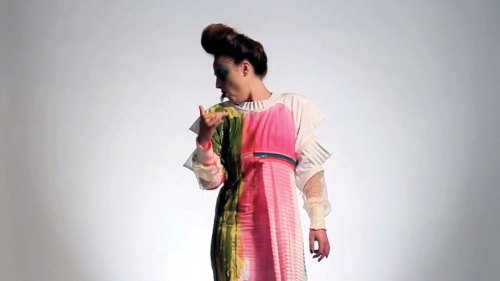 Millie, is there a certain colour you like to spew more than others?

Millie: I really like blue because it is so unnatural, it’s the last colour you would expect to see coming out of your mouth.

For the fashion website SHOWstudio you did a performance using canvases as the targets of your soy milk fluid. Are you planning to do more of these longer-lasting works of disgust and astonishment?

Millie: I’m really enjoying working with film and I work for some really interesting directors. Performances are great, instant and uncontrollable. With film it’s nice to add another layer onto it and be able to play with sets and poses. If you plan something for a long while it gets so wrapped up in what you want the end result to look like, but if you take that away, it makes the artwork creating itself. It ends up being more powerful and usually much more interesting than what you could imagine.

Martina, Millie and Piotr hope to collaborate again in the future. Meanwhile, Martina is working on her next collection, Millie performing with colourful soy milk up to twice a week and Piotr is away in Africa doing some charity work. I am looking forward to seeing them again this week at London Fashion Week’s Pedigree. 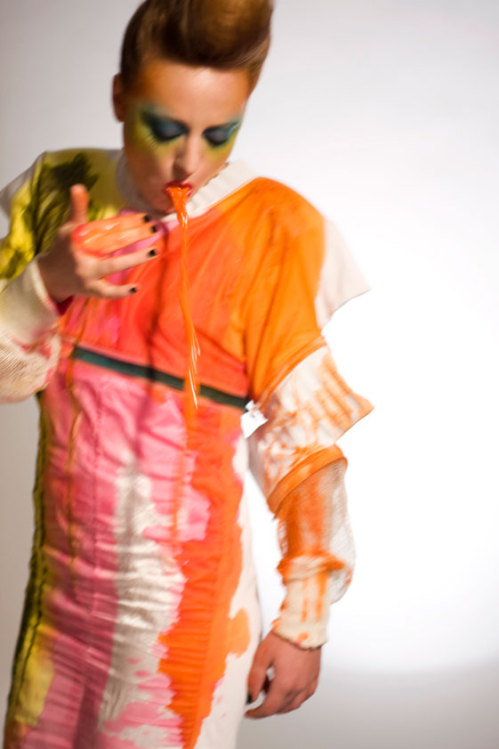 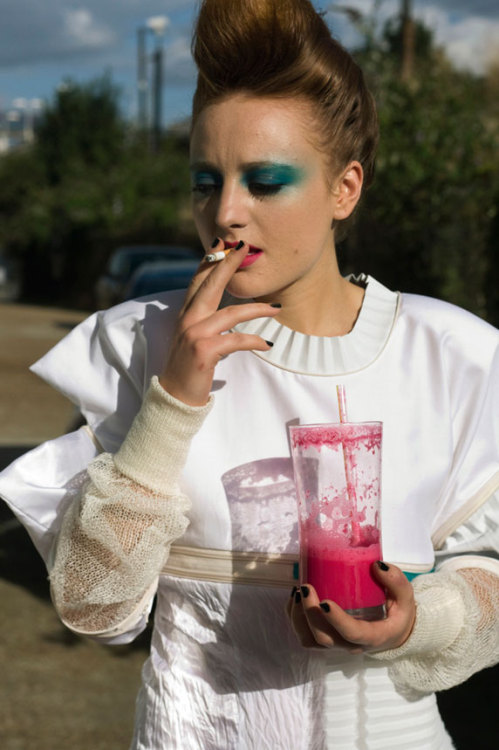 Next Pedigree coming up this Saturday at Lee Street Studios, London

Piotr Onak was responsible for the visual translation of this project.
– Born in Poland in Miechow in 1984 pisces
– BA(hons) in Art, Fashion Communication Media with Promotion at Central Saint Martins College of the Arts and Design, 2010
– Has worked as design and media assistant for ShowStudio, Test, Magazine, London College of Fashion, Six Creative, has been producing videos, editing for exhibitions and clients around the world, including Somerset House, New York and London Soho House– Is running the online fashion magazine PlatformM since 2009 and has his own blog

Millie Brown is the exposed, beautiful artist undertaking an incredibly demanding performance with all the calmness in the world
– Born in London, 1986
– Is a member of the art collective !WOWOW!
– Has worked with ShowStudio, Nick Knight, Ruth Hogben, Gareth Pugh, Matthew Stone, Diane Pernet, Lady Gaga, Griffin, Jez Tozer, Adham Faramawy
– Is holder of own blog