For designer Ashish every day is different. A fixture at London Fashion Week since his debut collection in 2001, the Indian creative is a rising star in the fashion business and with his bright outfits promises the future to be sparkling and shiny. 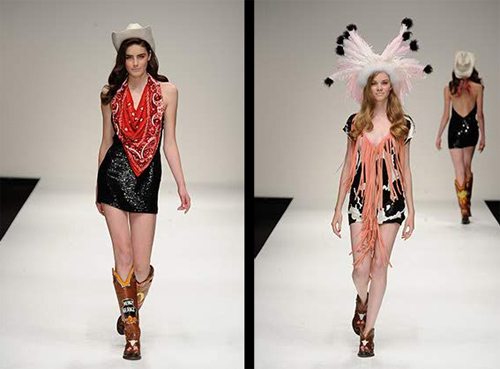 I met the Indian born designer shortly after the SS2011 Fashion Week in London, where he displayed a loud, cheeky show à la ethnic pop meets American vintage – or is it American pop meets Western glamour?  His design characteristic is of an idiosyncratic mix of classic sportswear and glamour which comes in vibrant colours and cow skin patterns, original extra-long tassels, humorous over-sized silhouettes, feather-adorned trucker caps, and – lest we forget – sequines in abundance. Pocahontas‘ boots are hand painted with a bright sense of humor and are again signifiers of American pop culture. ‚I thought it would be funny to have an obvious reference such as McDonald’s golden arches. It’s not something you normally would do.‘ the creative explains. 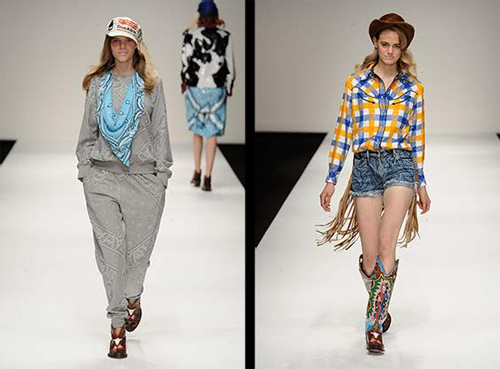 Ashish likes fashion to be dirty, sexy, fun, a little bit camp and a hugely sparkling.

And he likes fashion to be dirty, sexy, fun, a little bit camp and a hugely sparkling: Sequin embroideries with gorgeous production values are Ashish’s signature. ‚It’s not so much Bollywood-glitter than traditional American glamour‘, he explains, ‚The more I use sequins, the more I learn and the more I’m obsessed by them.‘ For an item such as the cricket-inspired jumper from his latest collection, up to sixteen people work for seven days, of which three days are taken only to fully apply the sequins, which would absolutely justify its hefty pricetag in the hundreds. 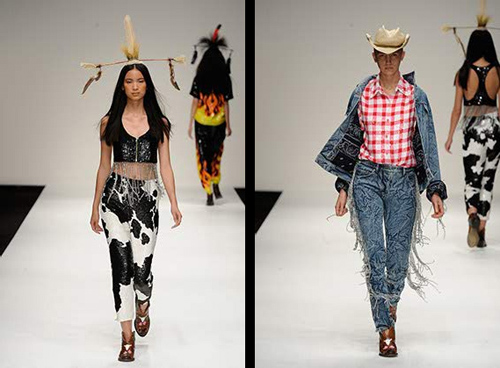 Inspired by street wear, old movies and their characters, American pop culture, and faraway places he has never visited, he doesn’t aspire trend orientated pieces. On the contrary, when designing he tries not to look at contemporary fashion: ‚I just do what I love and follow my instinct. If some of my pieces represent a current trend it is purely incidental, as it happened with the leather fringes for this season. As a designer you have an instinct for what is right.“ he explains. This instinct of his brings alive a dizzy mix of references, loud, cheerful patterns, bold graphics, and beautiful handcrafted pieces with a refreshing feel-good factor to them. Despite the aforesaid trend-immunity one can spot something well-known here and there but this barely harms the collection’s handwriting. 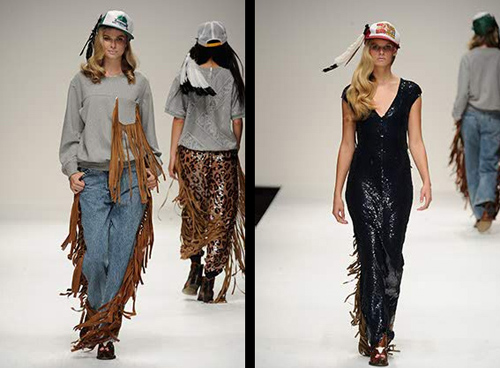 - or is it American pop meets Western glamour?

Ashish’s muses change every season, if not every week, and mostly they are not about a specific person but a characteristic. For the joyful SS2011 collection it was the sequined cowgirl, self-confidently emblazoned with flaming motifs, ‚fun-loving and sexy with a sense of humour.‘ as Ashish describes her, ‚She likes to make an entrance.‘ His Calamity Jane knows how to move in ankle high cowboy boots and make those fringes swing. ‚Girls go out partying and want to get laid. So the dress has got to be sexy, look good on you and easily come off you.‘ 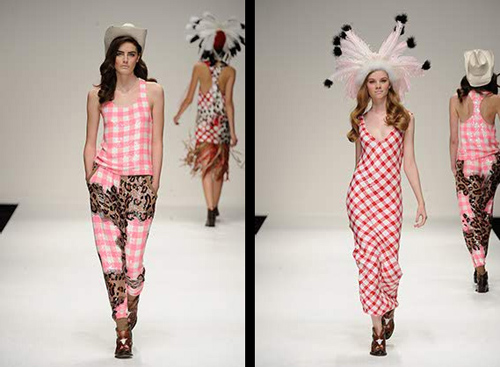 The youthful pieces are fun and fresh, underlining a casual aesthetic with a nonchalant attitude. But to go all the way completely sequined requires quite a strong sense of confidence. Accessible or not, sequins are great on stage, so Ashish naturally gets to dress a lot of pop stars such as Paloma Faith, Madonna, M.I.A., Patrick Wolf, Estelle – and Rihanna, who you could easily imagine……be singing along to the collection: ‚Come here rude boy, boy / Buckle up / I’mma give it to you stronger / Hands up / We can go a little longer / Tonight / I’mma get a little crazy / Get a little crazy, baby‘ 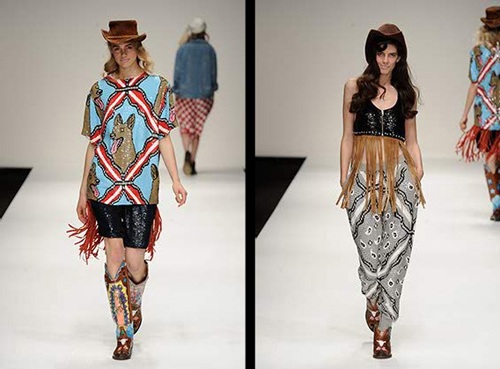 The sequined cowgirl as muse.

Ashish Gupta graduated in 2000 from the renowned Central Saint Martins as a fashion designer with the intention of going to Paris. This plan, however, abruptly fell through as his bag containing his portfolio got stolen at the Gare du Nord. Back in London he was lucky that the friend of a friend bought some of his pieces and brought them to the boutique Browns that subsequently ordered. In 2005 Ashish won the first of three New Generation Sponsorships: A new west-east fusion was established in multicultural London. 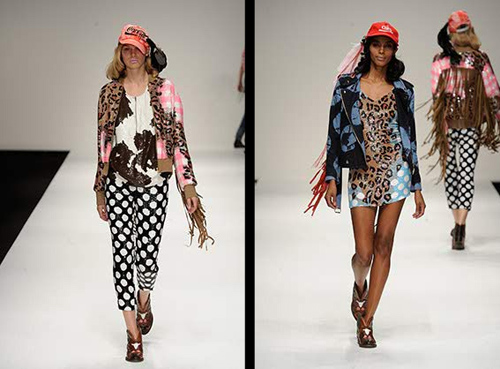 I am looking forward to his AW11 show tomorrow.