Paloma Faith, big fan of Ashish, attended yesterday’s show in a fully sequinned red and white checked dress of his last collection (placed next to Amber Rose) and made me smile. In my opinion, she is the Ashish girl per se. More than anyone of the other four front-rowers wearing Ashish. 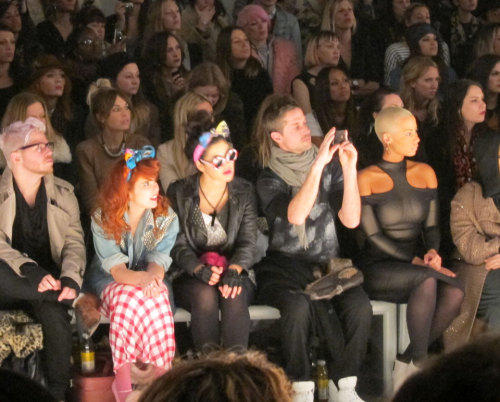 Paloma Faith - the incarnation of the Ashish girl.

Ashish makes her a nouveaux-riche playing with the controversy of her background and the luxe she is now experiencing: ‚Welcome to the newly formed principality of Ashishistan, a former Soviet republic that is fondly known as the ‘pearl of the Black Sea’ – partly for the beauty of its women, but largely for the unexploited oil and gas reserves that are fast making it the Central Asian equivalent of Switzerland.‘ says the press release. Having a Swiss background myself this makes me not just smile but laugh. Isn’t it just funny how one’s country is perceived internationally and used as a metaphor? 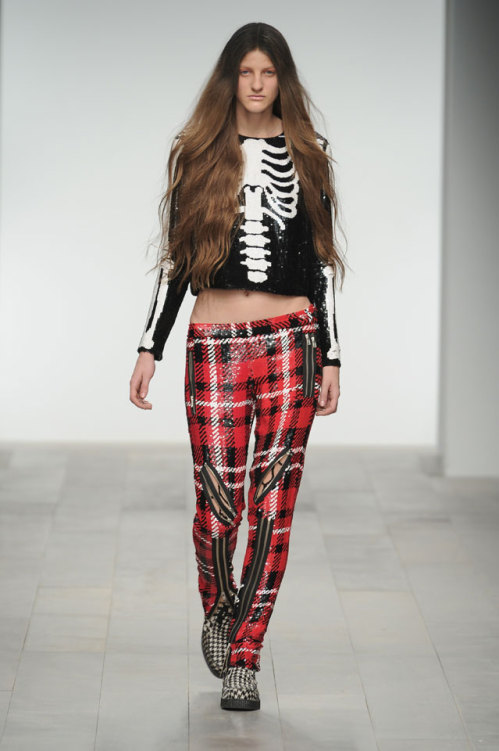 Once again M.I.A. set the stomping beat :‘Excuse me! What’s the problem here?‚ to which the models walked in flat plateaus chewing gum and showing off spiderweb tattoos on their boney knees and knit jumpers with bare midriff as well as Union Jack motifs on knits and boxer shorts and safety pins all over the tattered denim jacket. 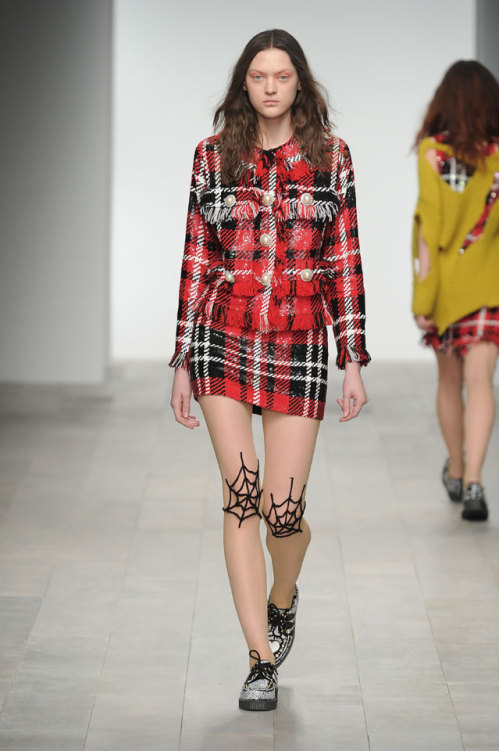 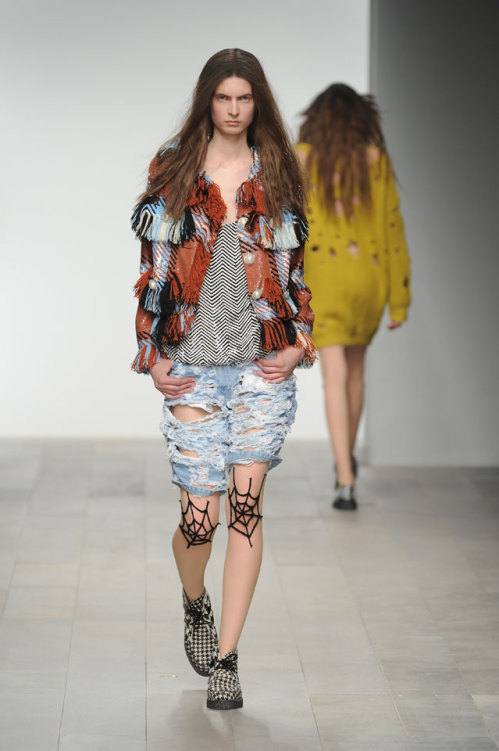 Too cool for the cold.

‚She’s a punk with a lower case ‘p’. Perfectly content to sponge off Mum and Dad, yet discreet enough to ensure her flatmates are unaware of her imminent succession to a thousand acres of grouse shooting and a castle that makes Balmoral look like a Portakabin.‘ Her decently orange painted lips keep shot. 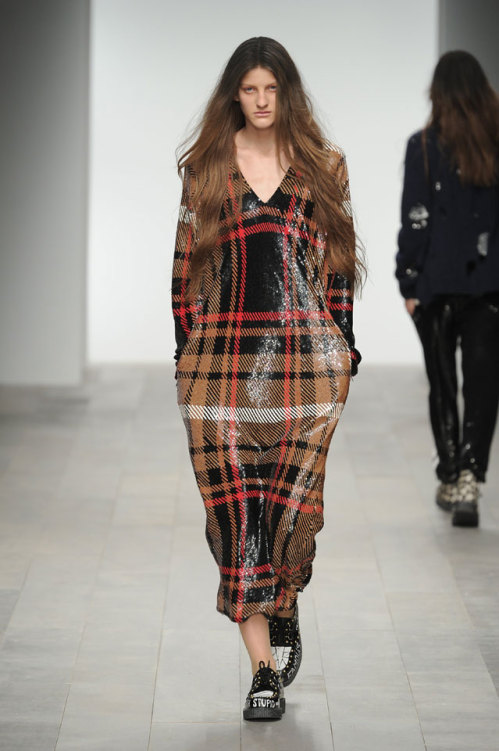 Just leave the zipper in the back half open.

Ragged black and white wool cable cardigans, cream scallop shell jumpers, and V-necks with an irregular raised cable knit combined with roses and teddy bear motifs on sequinned pants with zipper details made the mix, topped off by big emblazoning letters saying ‚Prop Acid‚, ‚Shit Happens‚ or ‚Save the Wales‚. Just loved this combination of glittering luxury and scruffy punk. 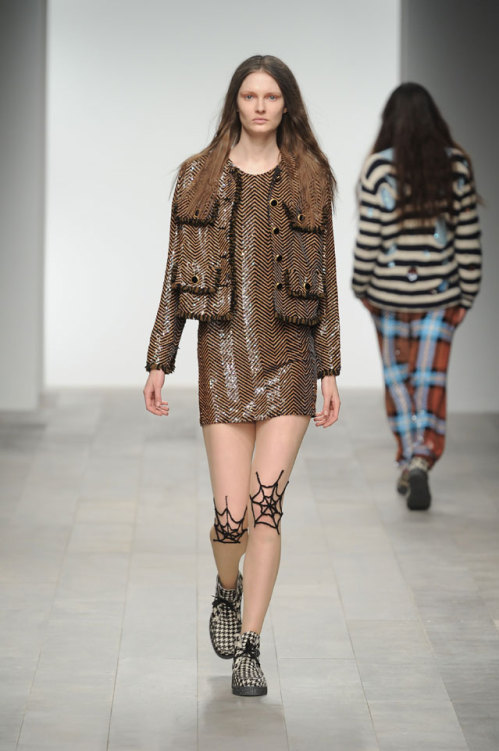 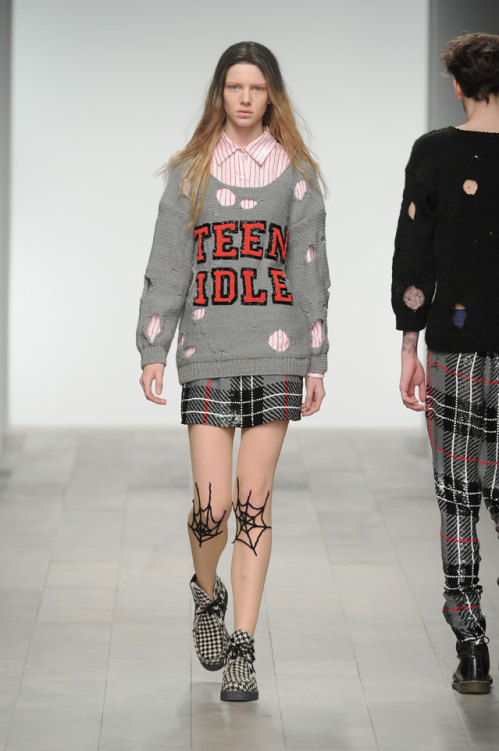 I was sitting next to one of the creatives from icône du jour and Fashioncapital and he came up with the expression Fashion Nigger for fashionista-nobodies attending every show possible which there are quite a few in London at the moment. I will so use this from now on. In the end it is just describing what we all are…crazy for fashion. Thanks for that, Rory. Now all stand for the national anthem of Ashishistan. 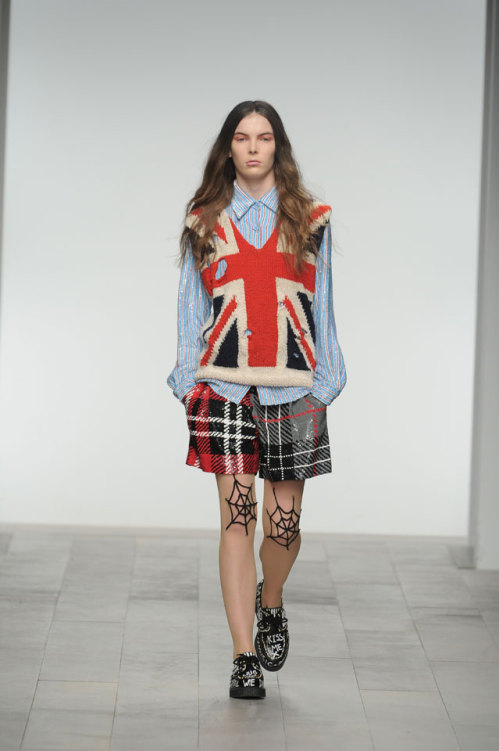 The British run-down chic at its very best. 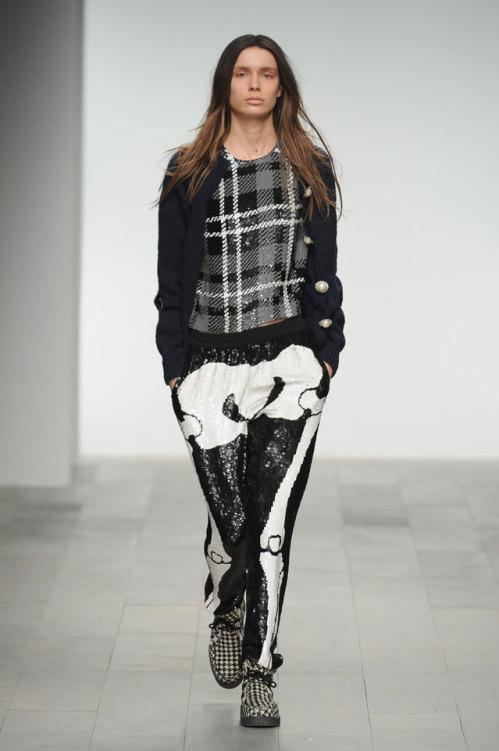