Burberry Prorsum Womenswear AW2011 was shown in a new venue tent in London’s Royal Park of Kensington Gardens next to the Albert Memorial. 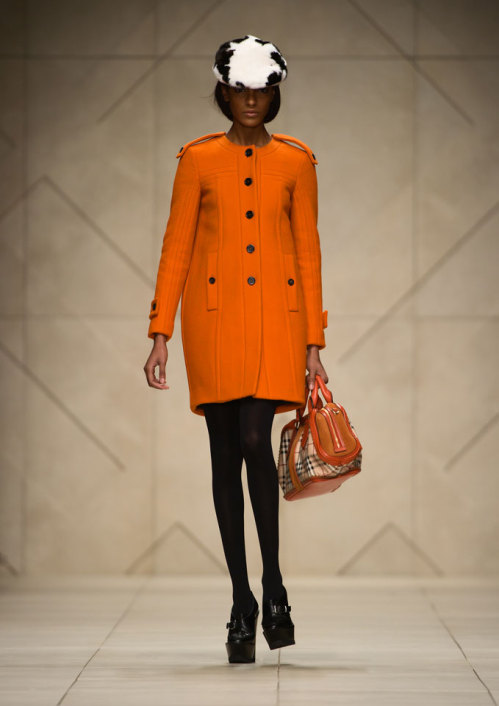 Im very bad at VIP spotting, shame on me, but here I was able to glean Mario Testino, Julia Restoin Roitfield, Tom Hughes, Orlando Bloom’s ex Kate Bosworth, Burberry CEO Angela Ahrendts, Lily Donaldson, in front of me there was the perfectly styled bob of Anna Wintour. Next to me there was Renato Sabhir, Burberry Perfume General Director Argentina, Chile, Uruguay and Peru that flew in just for the one show. He was great, like: Terry Rich who? Anna Win what? We had common ground which was great for the little chat while waiting for the show to begin. 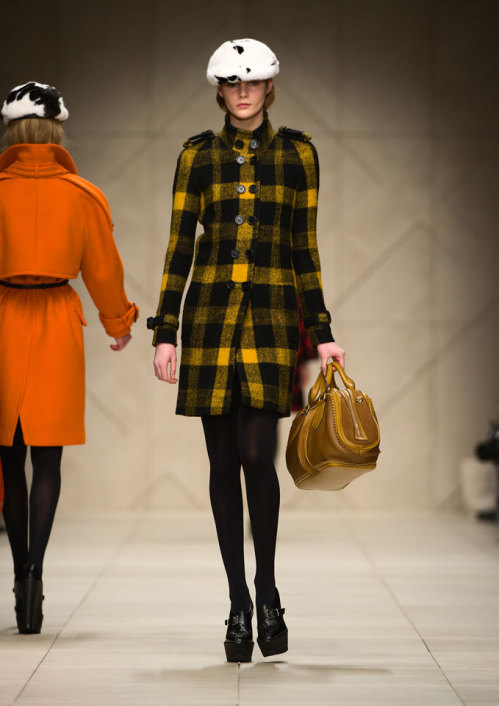 And when it did we were speechless. It was an outstanding presentation, just beautiful and I loved the music that started off with Dusty Springfield’s ‚You don’t own me‘, followed by Roger Daltrey and Adele. The collection was inspired by the 60s and early 70s, Barbara Hepworth and the British weather. No joke, by the British weather. Christopher Bailey says he loves the way it can change your mood and spirit, just as Burberry is about the wind, the sunshine, the rain. 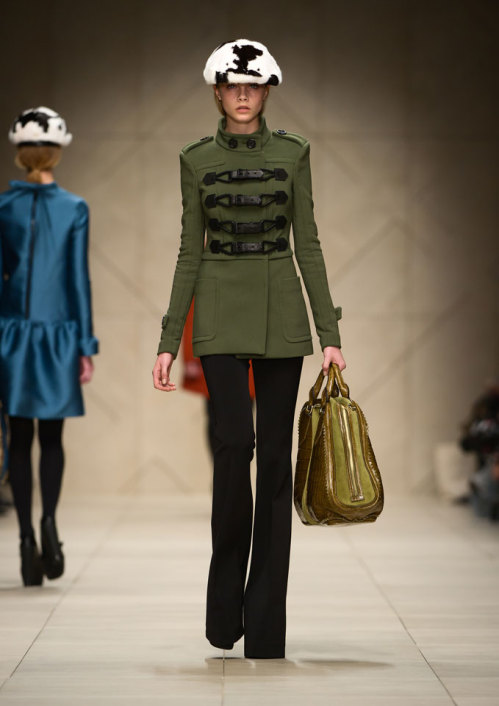 The military touch is still here

Named after former supermodel of the 60s Jean Shrimpton, who used to to advertising for Burberry, the collection included tulip-skirted dresses, short voluminous jackets, fur coats with accent on lower arms and shoulder parts, sleeveless knit tops, flared woollen trousers and of course trim coats that all came in in autumn colours such as brown, red, dark yellow, olive, purple and orange as the bright statement. 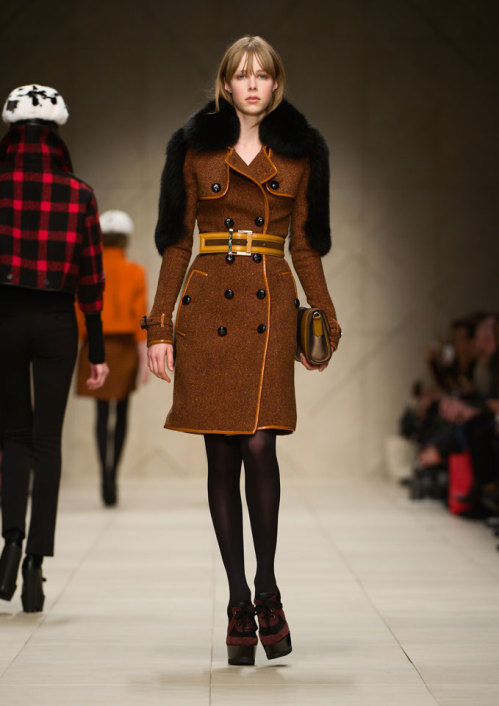 Fur details on shoulders are a big thing. 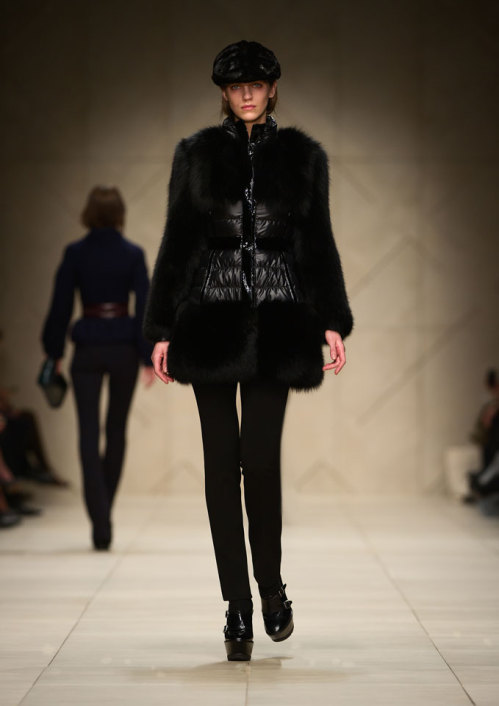 Quite amazing was the amount of matching accessories presented: From oversize leather bags to black and white fur caps, that were worn by women as well as by men, there is one for every outfit to go with. But most interesting were all the different ways of cuts Bailey transformed Burberry’s signature piece – the trench coat. At the end all models paced the catwalk again, covered with transparent cloaks to protect them against the real snow that dropped from the ceiling. A moment to remember. 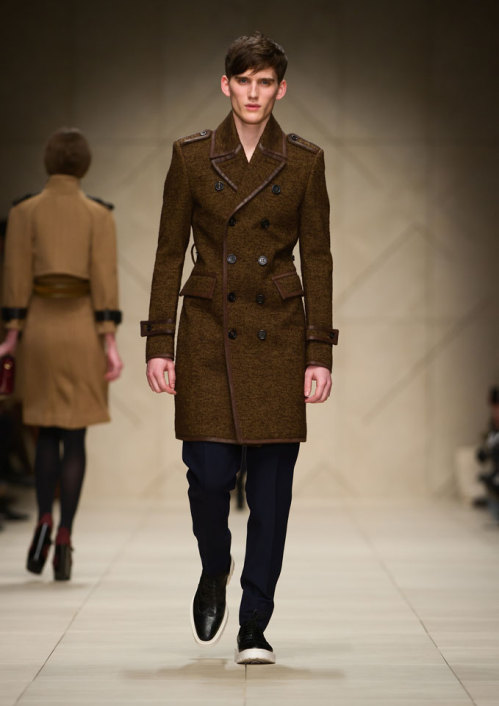 The trench in all varieties 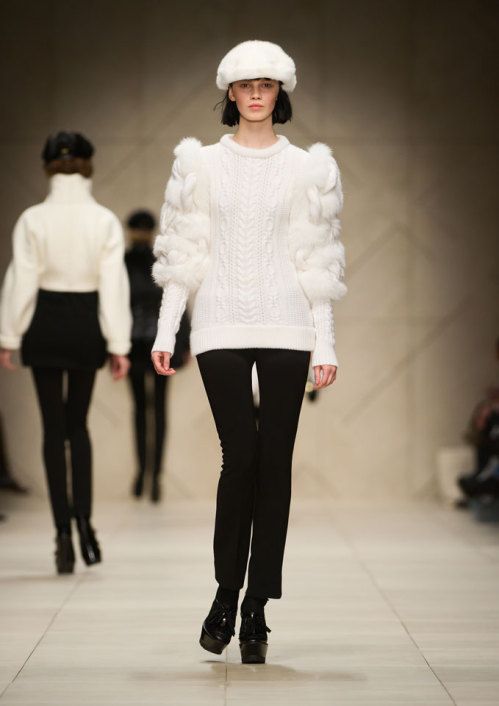 The show was live streamed to forty events worldwide, which is typical for Burberry’s go- and fetch-ahead when it comes to technical and media innovations. Since 2010, all Burberry printed material has been digitalised and replaced with interactive video look books for all collections, capturing movement of the models in 360º, all of which are also used in store on tablets and store screens as well as on-line. Viewers around the world can now buy the runway collection for one week, bringing the collection to consumers globally in seven weeks. 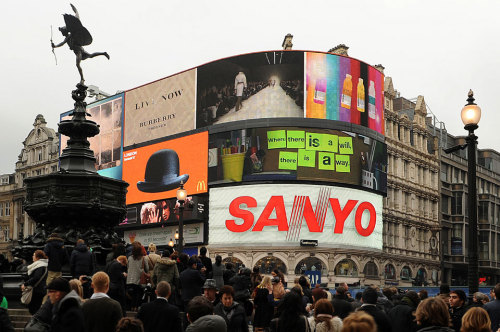 The show was live streamed to forty events worldwide.

Since one and a half years Christopher Bailey is Chief Creative Officer of Burberry after eight years as its Creative Director. Burberry, which is headquartered in London and a member of the FTSE100, was founded in 1856. The Yorkshire-born also recently oversaw the design and development of the new 160,000 square foot Burberry Global Headquarters at Horseferry House in London, where the re-see took place yesterday. 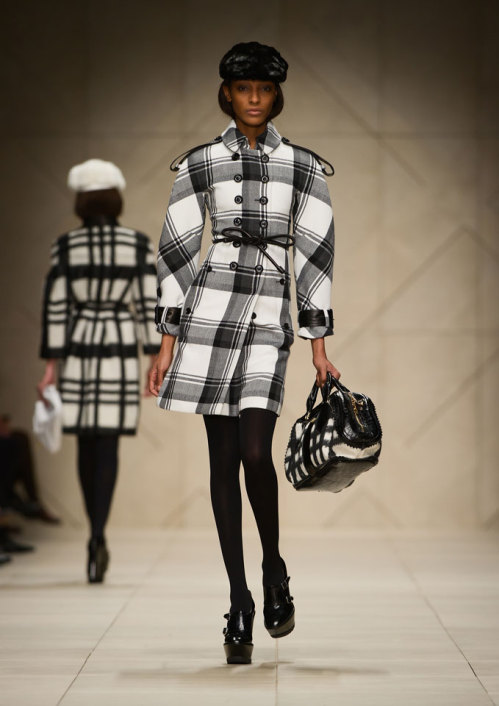 Bailey is talking about his video-inspirations for the AW11 collection here.

Download the music tracks from the show through the on demand service here using iTunes technology.