The ‚Musée de la Mode de la Ville de Paris‚ being closed for renovation work until spring 2012 it has launched its extra-mural exhibition programme at the sculpture ‚Musée Bourdelle‚ with a retrospective on Madame Grès. 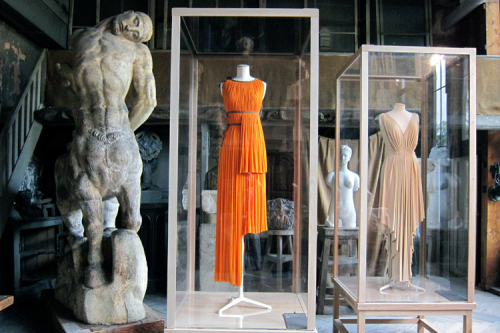 Madame Grès, Couture at Work at the Musée Bourdelle

Curated by Olivier Saillard, Laurent Cotta and Sylvie Lécallier it showcases not just dresses but also hundred sketches by Madame Grès as well as photographs by names such as Richard Avedon, Guy Bourdin, Cecil Beaton and Henry Clarke that to a great extent featured her dresses in contemporary fashion magazines. 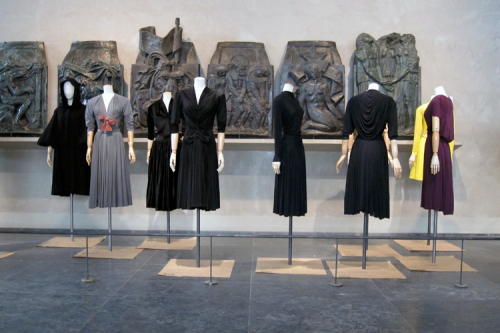 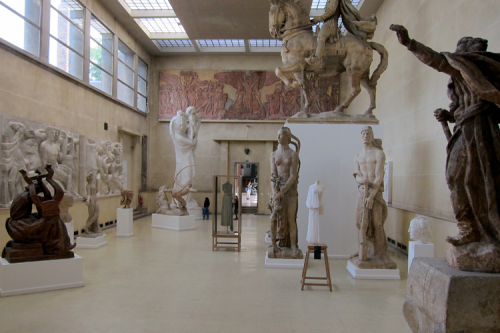 The Great Hall at the Musée Bourdelle

Between sculptures by Emile-Antoine Bourdelle, some eighty creations of Mme Grès are exhibited in this fantastic environment. Both arts engaging with the human body, the studio-like rooms offer the perfect space for this exhibition. Funnily, the sculptures are made of freestone, which in French is called ‚Gres‘, too. 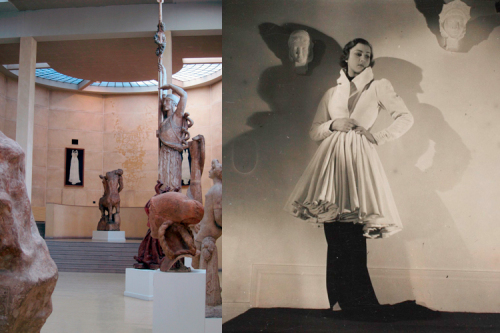 ‘I wanted to be a sculptor. For me, working with fabric or stone is the same thing.’ - Madame Grèsright; photo on the right: © Boris Lipnitzki / Roger-Viollet 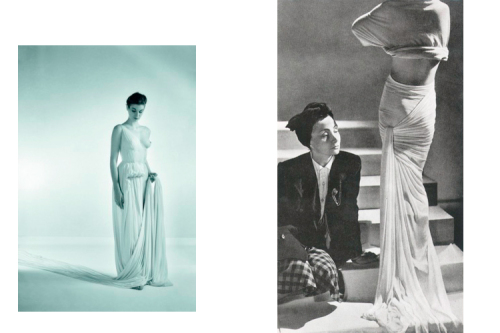 ‚When I see a fabric, I know straight away what I am going to do with it‚. For Madame Grès, born 1903, the human body ‚is not always perfect. There is always parts of the body that are beautiful and others that are less beautiful‘ as she used to say. After having started off as a milliner, it was her aim to flatter the female body and hide any unfavourable forms as well as pursuing her ideal of the seamless garment until her death in 1993. Madame Grès invented an original and deliberately timeless economy of line and volume and the purity of her pieces should become her hallmark. 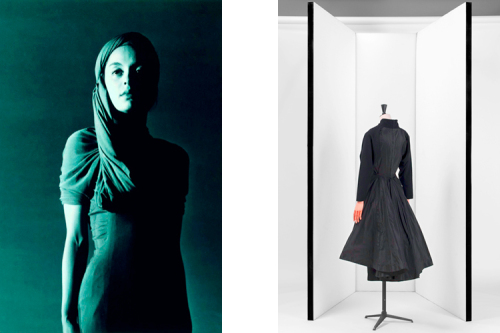 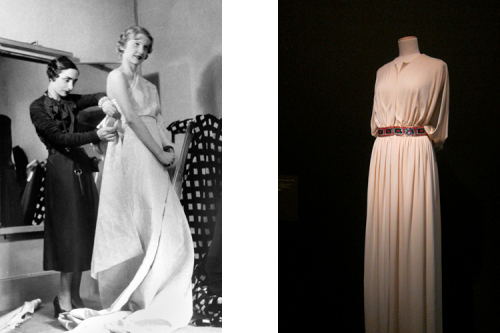 By 1933, the designs of Germaine Krebs, the future Madame Grès, had already made a name for themselves at her first fashion house ‚Alix Couture‘. Sculpting the fabric onto the bust creating flowing jersey and silk chiffon dresses she explained: ‚I need perfection. I don’t want to be disturbed by something imperfect. And I am certainly not the only one.‚ She wasn’t. Marlene Dietrich was amongst her famous clients, as well as Greta Garbo and Isadora Duncan. In 1942, she opened her couture house ‚GRES‘ at the Rue de la paix in Paris, which she directed until 1988 when it was bought by Japanese Yagi Tsusho. The name ‚Gres‘ derived from the name of her husband Serge Czerefkov, a Russion painter. Although the marriage didn’t last long, she continued to work under his alias. 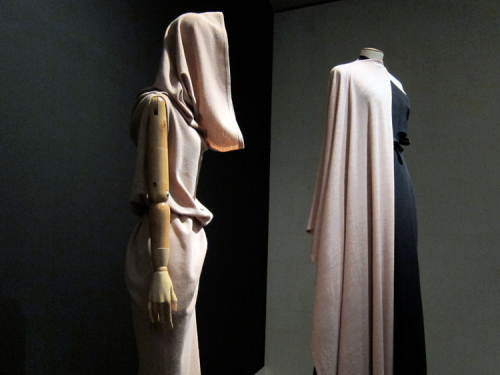 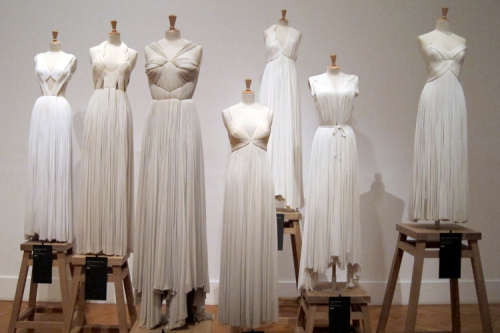 The apparent simplicity of her art always hid the extreme complexity of her skills.

After the war, Madame Grès started to use yards and yards of material for each of her creations. Madame Grès developed creativity in very different sections using asymmetric, antique-style figure-moulding drapery, or fuller forms when she worked in faille or taffeta. This set her apart from her contemporaries such as Madeleine Vionnet, from whom she adopted the one or the other customer. She preferred to ‘sculpt’ unique pieces and present them as a collection, rather than chasing trends and submit to the fashion’s seasons. The sculptural evening dresses for which she received the Dé d’or award in 1976, created from the 30s to the 80s, always in jersey and often ivory or pearl grey, have radiantly withstood the test of time. 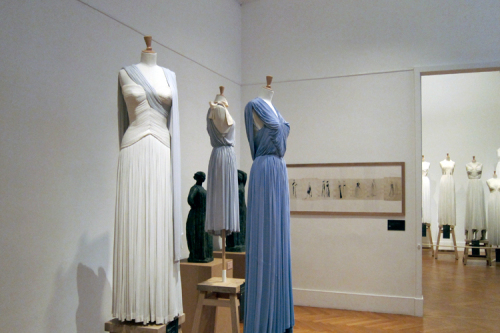 Her day wear – the dresses and coats of the 50s and the purified designs in double-sided wool of the 60s and 70s – are still an inspiration for couturiers and designers today. The art of Madame Grès is timeless. 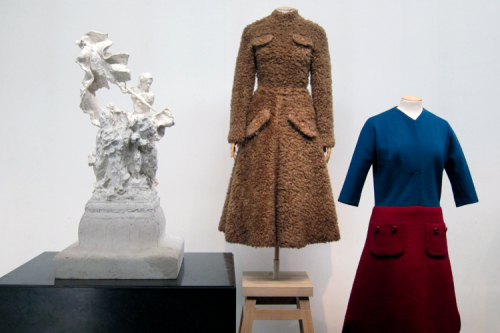 Alongside couture and perfume, Grès created jewellery between 1969 and 1971 that are very graphic, monumental and filiate from the ones known from the 1930s, produced in the same material of gilded and silvered metal. The topic of her jewellery centered around leaves and organic forms. 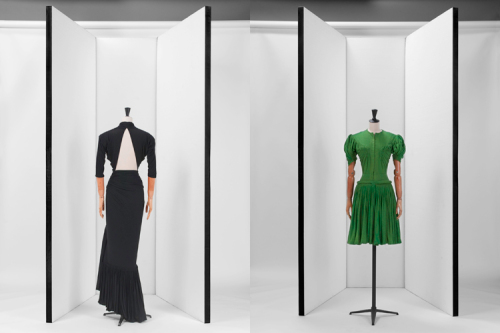 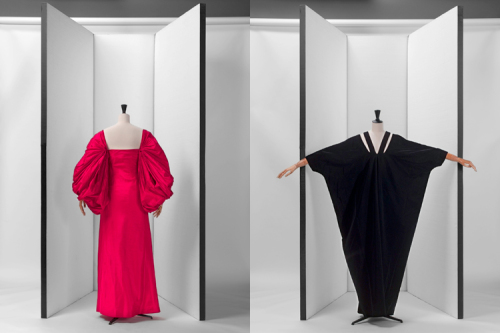 At the end of the exhibition there is an extract of the film ‚Portrait de Madame Grès‘ (December 1980) by Marie-José Lepicard, in which an elderly but elegant Madame Grès states that couture is ‚a work of architecture and needs a lot of heart. In all these collections I have done in solitude there is a lot of me woven-in‘. 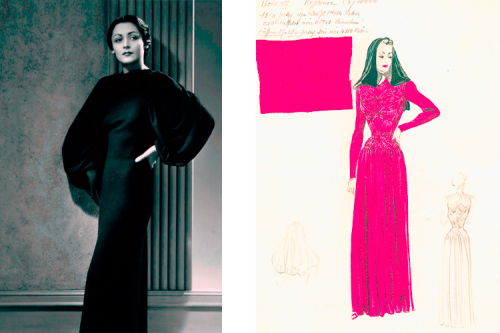 The exhibition ‚Madame Grès, Couture at Work‘ is on display at the ‚Musée Bourdelle‚ until 24 July 2011, Tuesdays to Sundays 10am – 6pm