London Fashion Week may now have drawn to a close but the echoes and thrills of that Wednesday’s menswear day are still firmly in our minds. Vauxhall Fashion Scout, held as usual at Freemason’s Hall, presented their Ones To Watch. 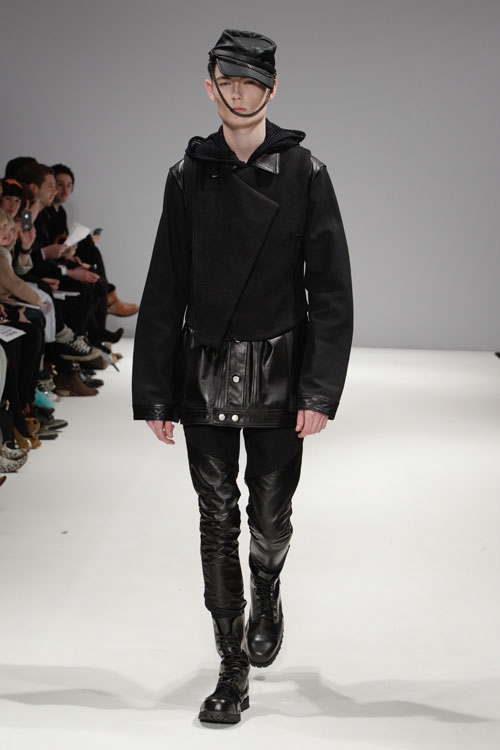 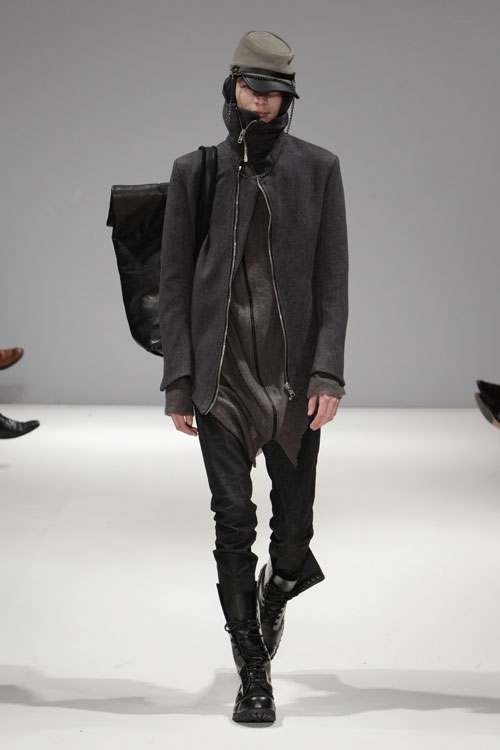 It included the likes of A.Hallucintion – who’s wearable crisp white shirts and modernised tailored jackets could make any man look like James Bond – C/Bruerberg – who‘s teenage-friendship-bracelet style scarves surely made everyone in the audience feel a little nostalgic – Mr Lipop – who’s mix of sunglasses and fur hoods made you feel like one minute you were in the French Riviera and the next the North Pole – and finally Asger Juel Larson, a talented and extremely recent MA graduate from the prestigious London College of Fashion. 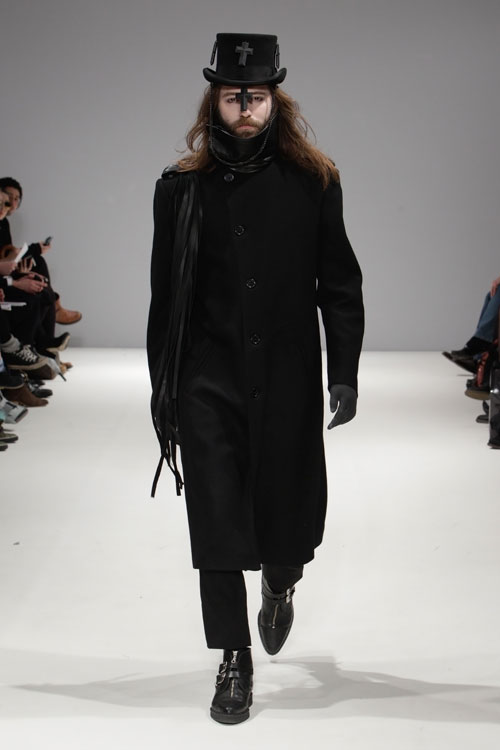 The hair of Kate Middleton and the outfit of a Marilyn Manson video extra. 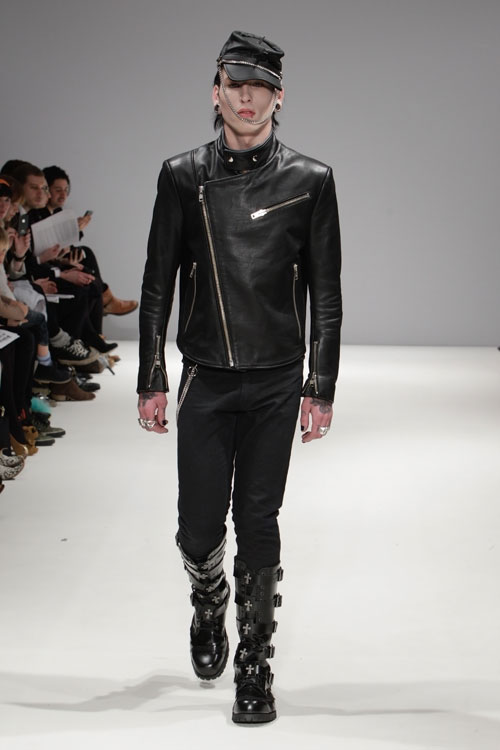 The first Asger Juel Larson model to parade himself – at exhilarating speed I may add – down the catwalk had the hair of Kate Middleton and the outfit, it was presumed at first, of a Marilyn Manson video extra. Yet once the all-in-black clad model grew closer to the pack of photographers that hungrily awaited him, the sharp and structured silhouette and unusualness of fabrics became more apparent. Once the stuffed blackbird headband and various ‘punked-up’ top-hats had made their appearance we – the audience – were completely bawled over. 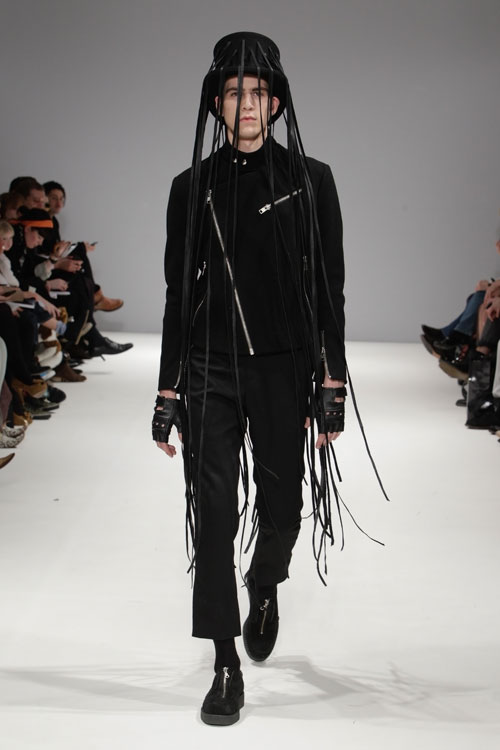 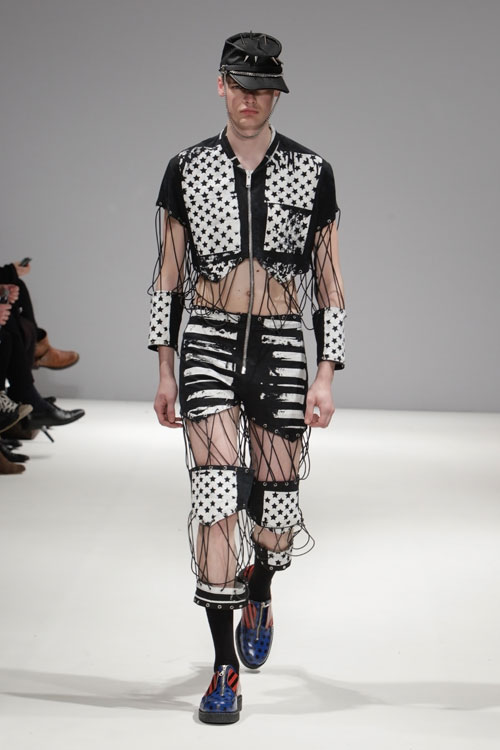 An occasional flash of a midriff

The ideas behind the collection may have been haunting but the looks themselves were less so. The fake tattoos – so very on-trend – along with layers of fish netting and the occasional flash of a midriff made it easy on the eye but still oh-so very gothic, making sure that any hardcore Goths, Asger included, did not go home disappointed. Asger graduated from his menswear MA merely weeks ago but by the looks of things this equally-as-gothic/punk-as-his-collection designer is already a rather established – and extremely popular – figure within the fashion world. He is certainly a ‘one-to-watch’. 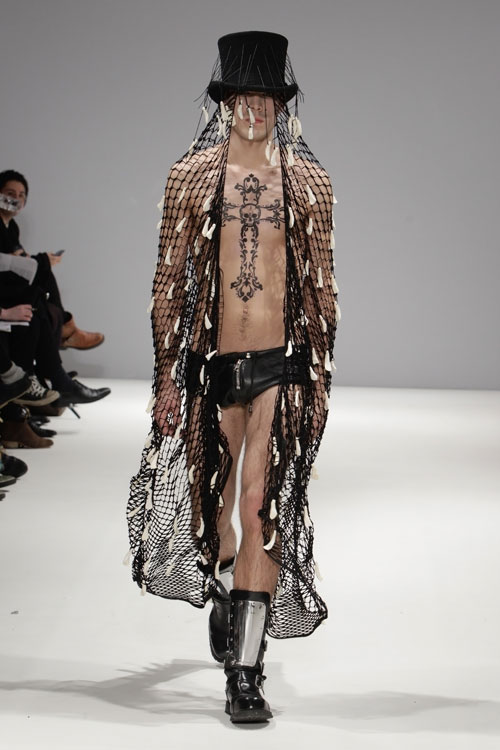 With thanks to Hannah Newman for her contribution.