‚When I started making clothes, all I wanted was for women to wear men’s clothes.‘ Yohji Yamamoto recalls. 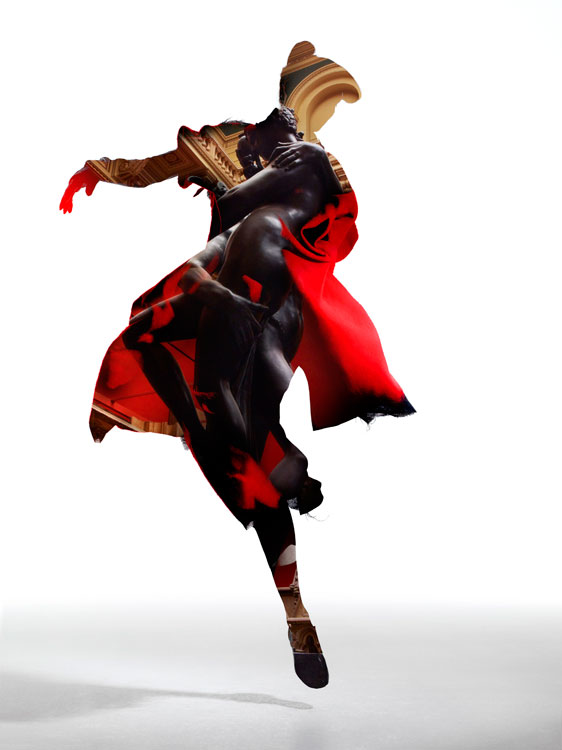 An installation-based retrospective in the V&A Museum in London, taking place thirty years after his Paris debut, is devoted to his lifework and is the first UK solo exhibition that includes his menswear. Designed by his long-time collaborator, scenographer and lighting designer Masao Nihei, it features over eighty garments spanning Yamamoto’s career that is characterised by unusual pattern cutting and a frequent and skilful use of black, a colour that he describes as ‚modest and arrogant at the same time‘. 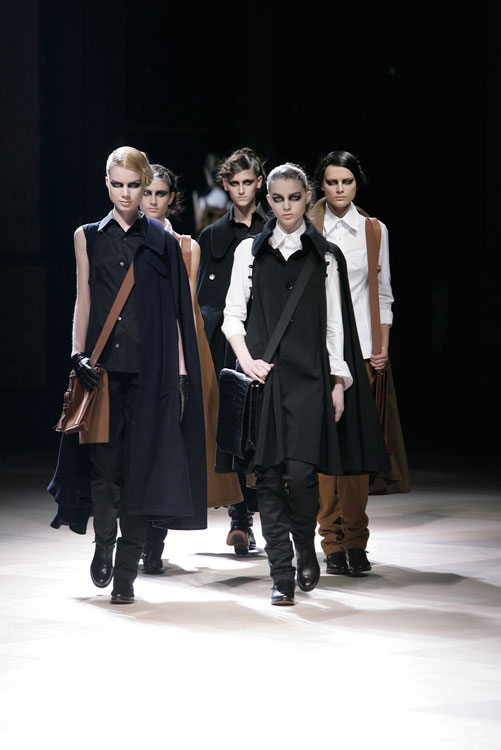 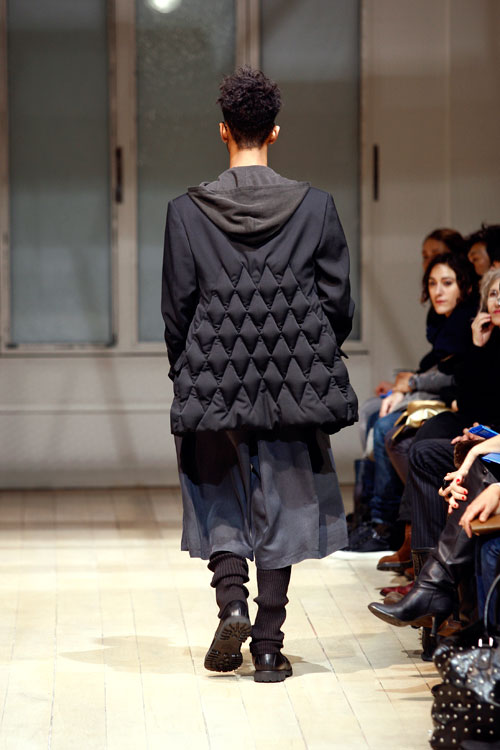 Yamamoto launched his first ready to wear label Y’s in 1972, showed his first collection in Tokyo in 1977, and established the higher-priced offshoot Yohji Yamamoto thirty years ago in 1981. At the heart of his approach to design is a deep interest in textiles. Fabric, he said, ‚is everything‘. His asymmetric cuts and seemingly unflattering curves of his early work contradicted the close-fitted styles of the catwalks and he has refused traditional norms of fashion ever. Yamamoto has experimented with new modalities of gender identity and gender stereotypes and rewritten notions of beauty in fashion with great sense of humour. 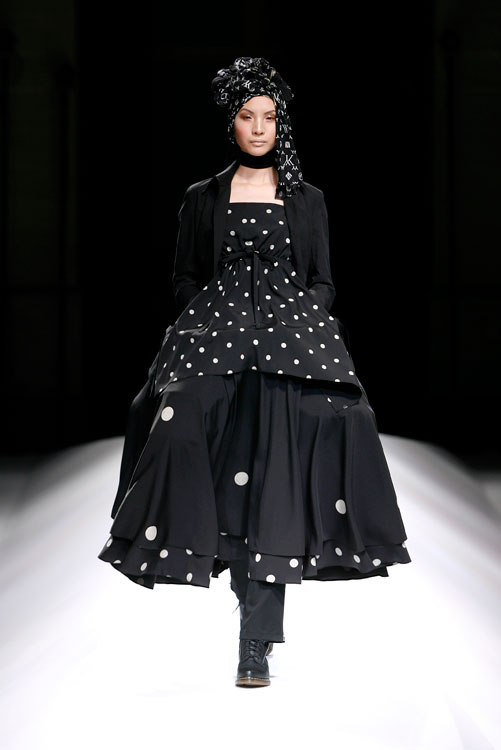 The menswear silhouette Yohji Yamamoto introduced from the mid 1980s onwards – loose black suit jacket, wide trousers and white T-shirt – became almost a uniform for the well-dressed men in the creative industries. The garments seemed oversized and unfinished, playing with ideas of gender or with fabrics not normally used in fashion, such as felt or neoprene. ‚When I started a men’s line in Paris, my message was very simple: let’s be outside of this. Let’s be far from our suits and ties. Let’s be far from businessmen. Let’s be vagabonds.‘ the designer states. 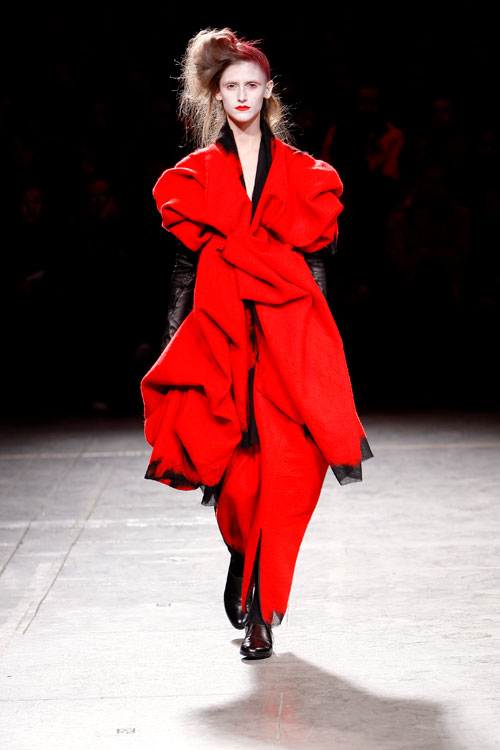 'I pursue the women from behind.' - Yohji Yamamoto. AW 2009. Photo: Monica Feudi 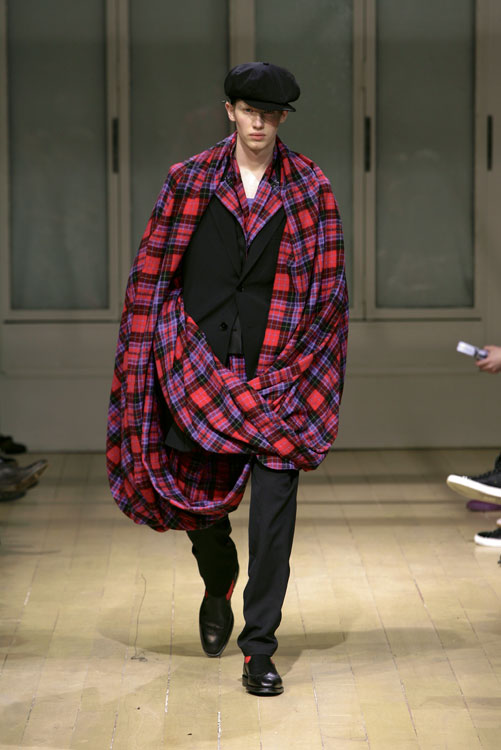 The exposed garments are accompanied by a mixed-media timeline showing excerpts from his fashion shows, films and performances, graphic material and selected photographs which contextualise his career. Of course the movies Brother (1999), Takeshi Kitano’s first collaboration with Yamamoto, as well as Dolls (2002) are not missing. Unfortunately, the videos are badly displayed, the lights reflect and some are even distorted due to wrong formatting, such as with the video of the SS 2003 Y-3 collection, the first ever brand collaboration established between a fashion designer and a sportswear manufacturer. 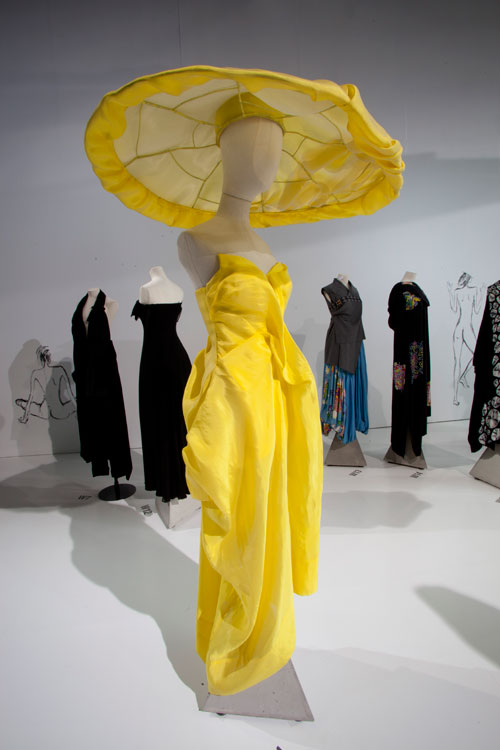 Opposite you’ll find small but great photographs by Alessandro Campi, Gael Amzalg and Ronald Stoops of Yamamoto’s previous three-part solo exhibition Tryptych that took place in the Galeria d’art Moderna of the Palazzo Pitti in Florence (Correspondences, 2005), the Musée de la Mode in Paris (Juste des Vêtements, 2005) and in the MoMa Fashion Museum in Antwerp (Dream Shop 2006), each of one examined the designer and his work from multiple perspectives, depending on the location. 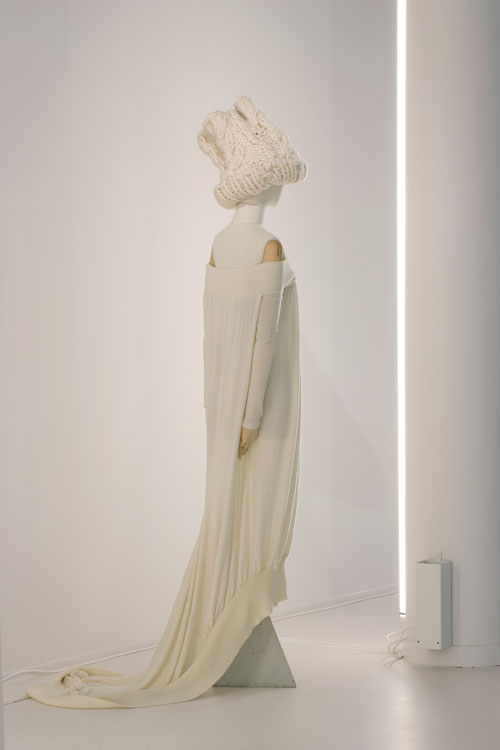 In the 1990’s Yohji Yamamoto followed one of his other passions – music. He recorded three albums, including Well, I Gotta Go (1991), Your Pain Shall Be Your Music (1994), and Hem: Handful, Empty Mood (1997) and toured Japan. On Your Pain Shall Be Your Music film director Wim Wenders is asking about our identity and concludes: ‚Identity is out of fashion‘, while actor Richard Bohringer bemoans the church bells that wake him and voice actor Otto Sander suggests to ‚throw up and leave‘. 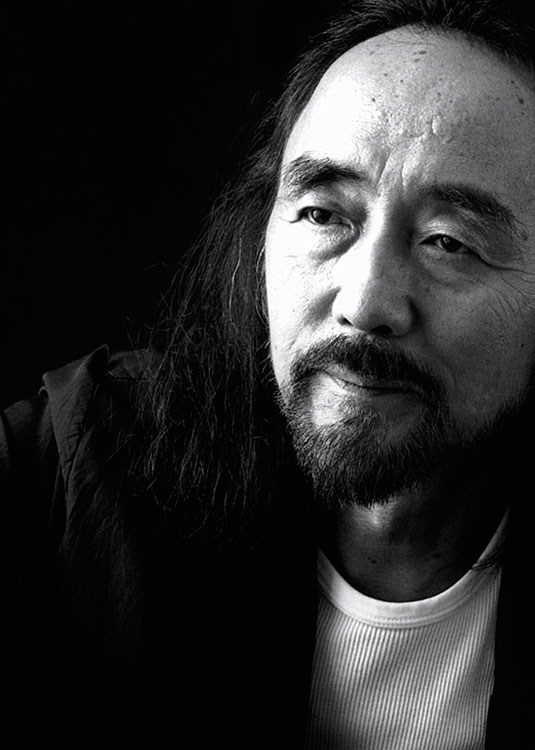 With respect to the catalogues and iconic images they produced for Yohji Yamamoto in the late 1980s, Peter Saville art directed the exhibition identity, publicity and catalogue working with Nick Knight to create imagery and YES Studio on graphic design. 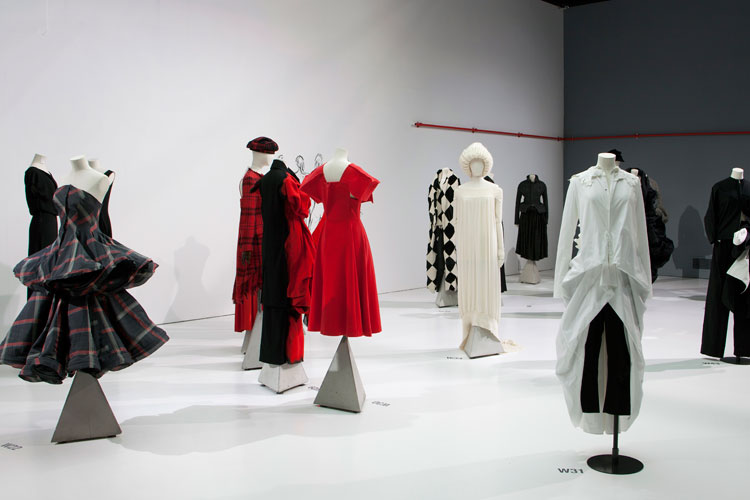 As part of the retrospective, Yamamoto’s work stretches further across London with exhibitions at the Wapping Project sites, at both Bankside (11 March to 14 May 2011) and Wapping (11 March to 10 July 2011) featuring an impressive, nearly scary, dress installation to be seen from a water pond accessible with a boat. 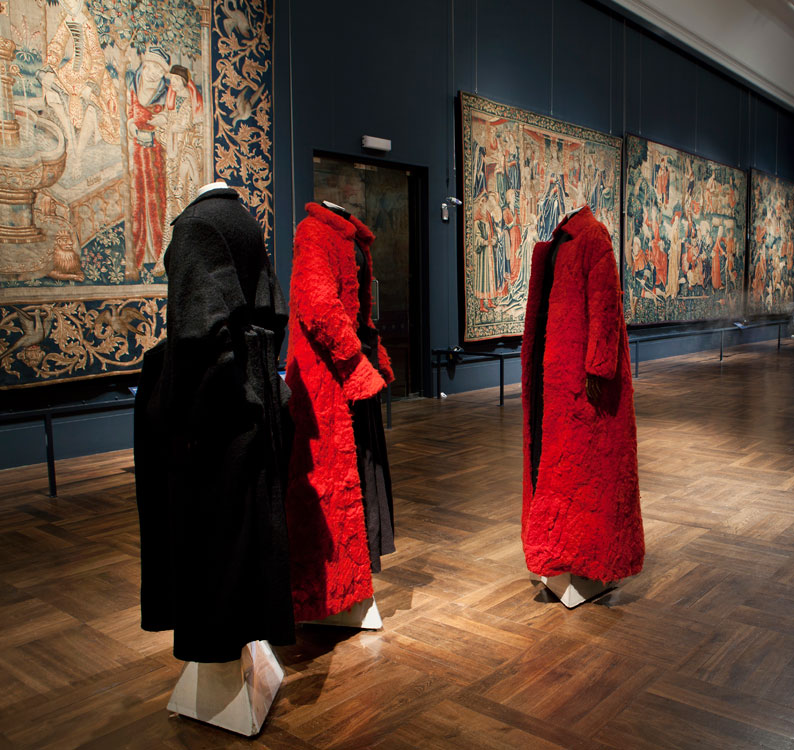